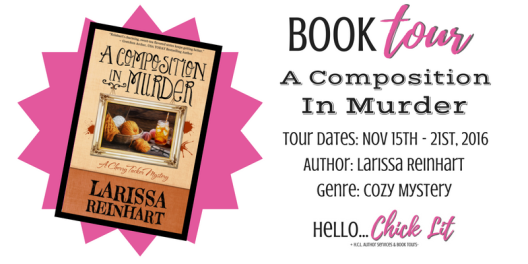 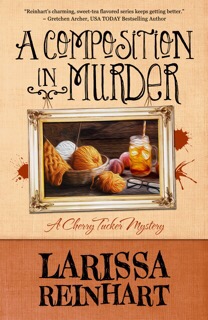 With a new art teaching gig at Halo House—Halo, Georgia’s posh independent living home—and Halo society scrutinizing her family and her love life, Cherry Tucker needs to stay out of trouble. However, her sleuthing skills are sought by Halo House’s most famous resident: Belvia Brakeman, the ninety-year-old, blind CEO and founder of Meemaw’s Tea. Belvia confides in Cherry that the family tea empire is in jeopardy. The CEO suspects her daughter, the COO, has been murdered and she might be next. Her offer is hard to refuse, but will have Cherry treading on Forks County Sheriff toes, namely her personal Deputy Heartache, Luke Harper.

Amid her town troubles, can Cherry put her reputation, romance, and life on the line for the final request of a sweet tea tycoon? While she juggles senior citizen shenanigans, small town politics, and corporate family scandals, Cherry finds the sweet tea business cutthroat in more ways than one.

A 2015 Georgia Author of the Year Best Mystery finalist, Larissa writes the Cherry Tucker Mystery series. The first in the series, PORTRAIT OF A DEAD GUY (2012), is a 2012 Daphne du Maurier finalist, 2012 The Emily finalist, and 2011 Dixie Kane Memorial winner. The sixth mystery, A COMPOSITION IN MURDER, is expected to release November 15, 2016. Her family and Cairn Terrier, Biscuit, now live in Nagoya, Japan, but still calls Georgia home. Visit her website, LarissaReinhart.com, find her chatting on Facebook, Instagram, and Goodreads, or join her Facebook street team, The Mystery Minions.

Check out all the Tour Stops:

A COMPOSITION IN MURDER, A Cherry Tucker Mystery #2, by Larissa Reinhart

“How much time do you have before you leave for work?” I asked against his raspy cheek. Even Luke’s five o’clock shadow tasted good. And looked sexy as hell against the definition of his cheekbones and hard-edged jaw. I loved his days off when he didn’t have to be clean-shaven, starched, and polyestered Deputy Harper. He’d soon head home to shave and change into his superhero costume.

“Not near enough.” He had moved past my neck and headed south fast. My sweater had disappeared. My corduroy shorts and ribbed tights would be next to go on Luke’s list of unnecessary clothing items. However, it was winter, and even though I lived in Georgia, standing bare-assed in my kitchen did not seem the brightest of ideas.

Particularly when my roommate was due home any moment.

Particularly when my roommate was my sort-of ex-husband.

“Wait up.” I caught Luke’s face between my hands and drew it north. “I’ve told you this before, any number of people have been known to walk through my back door. At any time of day. Or night.”

Luke leaned his body into mine. “That’s why I installed the deadbolt.” A dimple winked and his hands began a new journey.

“I can’t lock Todd out of his own house.”

The hands stopped roaming. “Sugar, this is not Todd’s house. This is your family’s house. Isn’t it time for him to move along?”

“Let’s not talk about that right now.”

“Fine. I had other things on my mind than talking.” His hands grasped my waist.

“Actually, I do want to talk. I’m having a Matlock moment.”

His hands fell from my waist and he cocked his head. “Mayberry Matlock?”

“Matlock didn’t live in Mayberry. Andy Griffith lived in Mayberry. Although he was a sheriff, so this might work for both shows.”

“Today I had to witness Belvia Brakeman signing her new will. And you know what I think?”

“Something’s up with that family. Her long-lost daughter showed up and seemed real pushy about making Miss Belvia sign the will. Doesn’t that strike you as odd?”

“I’ll tell you what’s odd, you thinking about Belvia Brakeman while I’m kissing you.” Luke placed his hands on either side of my legs and leaned forward until his forehead touched mine. “How’d you end up witnessing Belvia’s will?”

“She asked for me. As the deputy in charge of Della Brakeman’s hit and run, have you met her sister, Coralee?”

Luke pulled away. “Oh no. We aren’t doing this. No ma’am. Della Brakeman’s death is an active investigation.”

“You suspect foul play. I can hear it in your voice.”

“Didn’t say that, although getting struck by an unidentified vehicle and left to die makes it a suspicious death. We generally don’t throw around words like foul play.”

“Matlock did.” I kissed him, but before he could surge ahead, I broke contact to murmur against his lips, “So any suspects? Are you looking at Coralee Brakeman or whatever her married name is? When did she get to town? If she’s the big inheritor of Meemaw’s Tea fortune, that’s an awful big motive.”

“Cherrilyn Tucker.” Tiny kisses spread across my cheek, trailing heat. “Are you interfering in an open investigation when I just told you it was none of your beeswax?”

“No, sir, Deputy Harper. But I did not get good vibes from Coralee and I’m worried about Miss Belvia.”

“Let’s work on another type of vibe.” The kisses moved to my neck.

I shivered under the onslaught. “I’m also wondering why Miss Belvia wants to see me again. It’s not for a funeral portrait.”

Luke pulled back to study me. “What did you say to her?”

“Nothing, other than I wanted to make sure no one had tampered with her will. She signed blind, you know.”

“Lord Almighty. You know Mrs. Brakeman’s a powerful woman? Meemaw’s Tea is on one of those Fortune lists. Don’t mess around with that family. Especially with this suspicious death hanging over their heads.”

“I’m not. She requested to see me. Something about my other talents. Said she’d heard about me.”

“Other talents? Like this one?” He whispered a suggestion in my ear.

I slid my hands from his chest to his shoulders. “Todd really will be home any minute.”

“Then we have a minute. This is not a problem.”

1 thought on “Book Tour: A Composition in Murder by Larissa Reinhart”